AIG Used to Be The Best Place to Work

“The fourth quarter was another important step forward in positioning AIG for the future. Since I joined the company in May, we’ve added to our talent base, assessed and initiated underwriting actions, and established a new operating structure. 2017 represents a starting point from which we expect to build and 2018 will be a year of execution. Our actions to diversify our business and pursue profitable growth were further reflected in our January announcement of the acquisition of Validus” – Brian Duperreault, President and CEO.

Life and Retirement Results – Fourth quarter adjusted pre-tax income of $782 million included a charge of approximately $90 million for adjustments, primarily within Individual Retirement and Group Retirement, due to the ongoing modernization of actuarial systems and related model refinements. The fourth quarter of 2017 reflected higher fee income for Individual Retirement and Group Retirement due to historically high assets under administration driven by equity market performance and higher base net investment spread in Variable and Index Annuities, as well as Group Retirement. Full year base net investment spread for Fixed Annuities remained essentially flat with the prior year despite the impact of spread compression from reinvesting at lower rates.

Legacy – Fourth quarter adjusted pre-tax income of $411 million, compared to $1.1 billion in the prior year quarter, included higher than expected investment returns. The fourth quarter of 2016 included a pre-tax gain of $1.1 billion from the sale of commercial real estate in South Korea offset by unfavorable prior year loss reserve development.

AIG recently formed a Bermuda-domiciled legal entity named DSA Reinsurance Company, Ltd. (DSA Re) to act as AIG’s main run-off reinsurer. DSA Re’s primary purpose is to reinsure AIG’s Legacy Life and Retirement and Legacy General Insurance run-off lines. DSA Re will allow AIG to derive operational efficiencies by consolidating its legacy books in one legal entity and under one management team, while continuing to honor all policyholder commitments and client relationships. The amount expected to be reinsured upon receipt of all regulatory approvals represents approximately $37 billion or over 80% of Legacy total insurance reserves and will be backed with approximately $40 billion of invested assets managed by AIG Investments.

Since its establishment, Legacy has returned $10.0 billion of capital to AIG Parent, surpassing its original goal of $9.0 billion. Total book value impairments and losses on sales from Legacy investments that were sold from September 1, 2015 through December 31, 2017 totaled $1.0 billion.

Capital and Liquidity – In the fourth quarter of 2017, AIG Parent received approximately $290 million in dividends in the form of cash and fixed maturity securities from its Life and Retirement companies, as well as $2.0 billion associated with Legacy asset monetizations, including net proceeds of $1.1 billion from the sale of AIG’s remaining life settlements contracts. AIG Parent reimbursed $1.2 billion in the quarter to its insurance companies as a result of adjustments made to tax sharing payments during the year. At the end of 2017, Parent liquidity stood at $7.3 billion.

Validus Holdings – On January 21, 2018 AIG entered into an agreement to acquire Validus Holdings, a leading provider of reinsurance, primary insurance and asset management services, for $5.6 billion in cash. This transaction will strengthen AIG’s global General Insurance business by expanding its current product portfolio through additional distribution channels and advancing the tools available for underwriting. The transaction is expected to close in mid-2018 and is subject to obtaining the relevant regulatory approvals and other customary closing conditions. 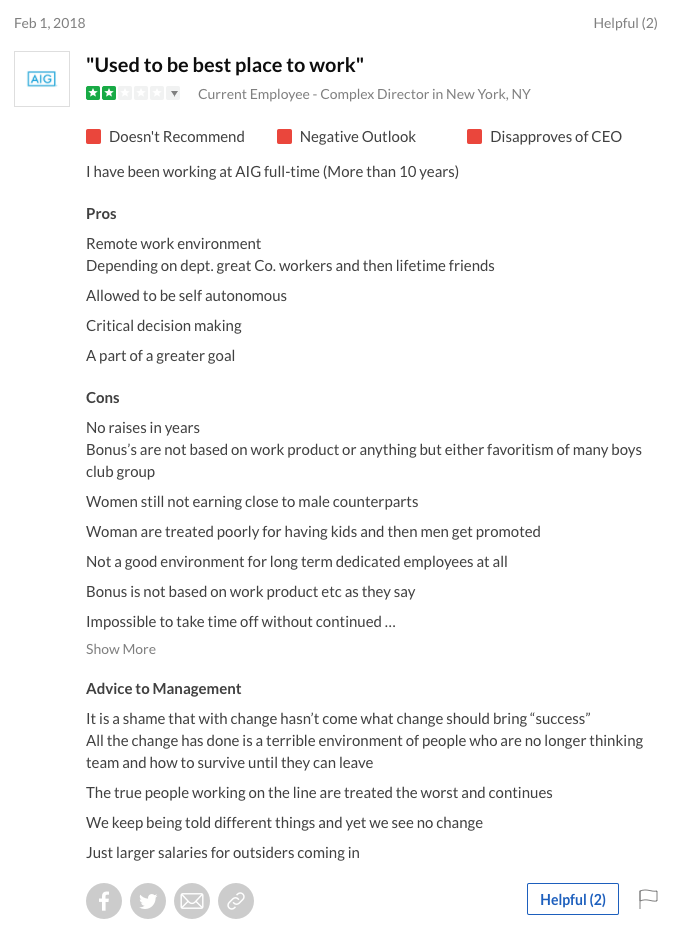 Subject to regulatory approval of both appointments, Mr. Rash is expected to join Talbot by January 1, 2021 and will be based in London.

The fully integrated brand and marketing program showcases the people, products and services that AIG Life & Retirement brings to its customers, clients and distribution partners.